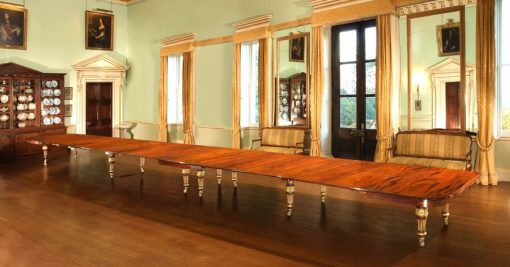 The three-section rectangular top with rounded ends above acanthus-carved, fluted tapering legs on turned beaded feet on castors, stamped ‘Cope/&Collinson/Patent’, the 15 leaves, each section stamped Holland & Sons and a ‘G’ above a Prince of Wales plume.

The present grand Royal dining-table once belonged to Edward Prince of Wales, later King Edward VII (1841-1910), the second longest serving heir-apparent in British history. It remained in the collection of subsequent members of the Royal family who resided at Marlborough House in London until it was sold by the order of Her Majesty the Queen in 1959. The table exemplifies the fine quality of craftsmanship and design associated with the distinguished 19th century cabinet-making firm of Holland and Sons and reflects the elegance and sumptuousness ascribed to the period during Edward, Prince of Wales’ residence at Marlborough House.

In anticipation of Edward, Prince Wales’ arrival with his new bride the interior of Marlborough House was extensively remodeled between 1861-1863. The Prince and Princess were very keen to exclusively favor British manufactures and designers for the new interiors. According to Arthur Beavan’s account of Marlborough House in 1896, in describing the preparations for the coming wedding in 1863, “in the furnishing and decorations of the state apartments…, English art and English manufacture have been duly patronized.” (Beavan, Marlborough House and its Occupants, Past and Present, London, 1896, pg. 56). Beavan goes on to say, “As a matter of fact, the old-established firm of Holland and Sons have always had the honor of “upholstering” for the Prince and Princess both at Sandringham and in London, and their beautiful cabinet-work can more than hold its own with anything made abroad”. (Beavan, op cit, pg. 56). 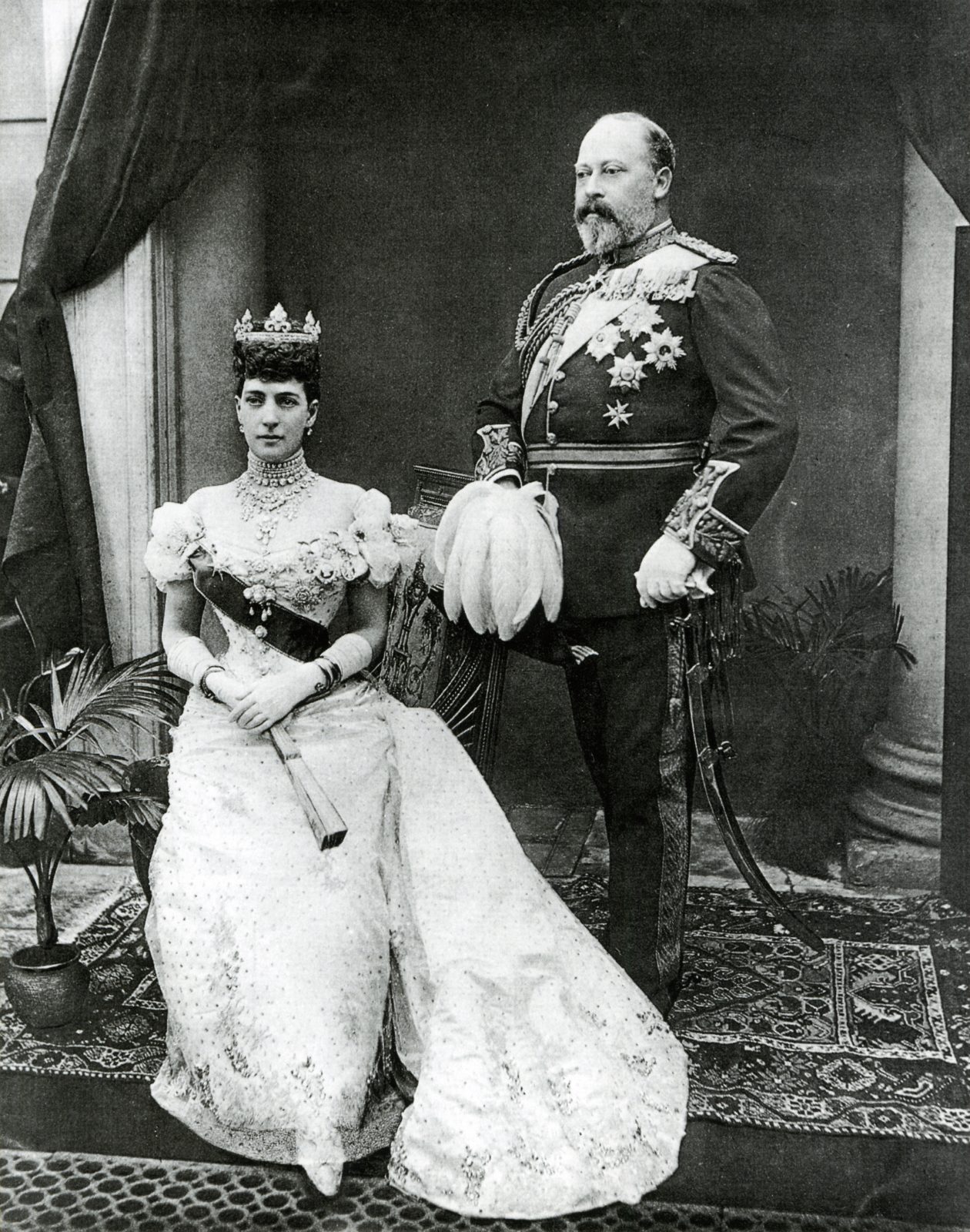 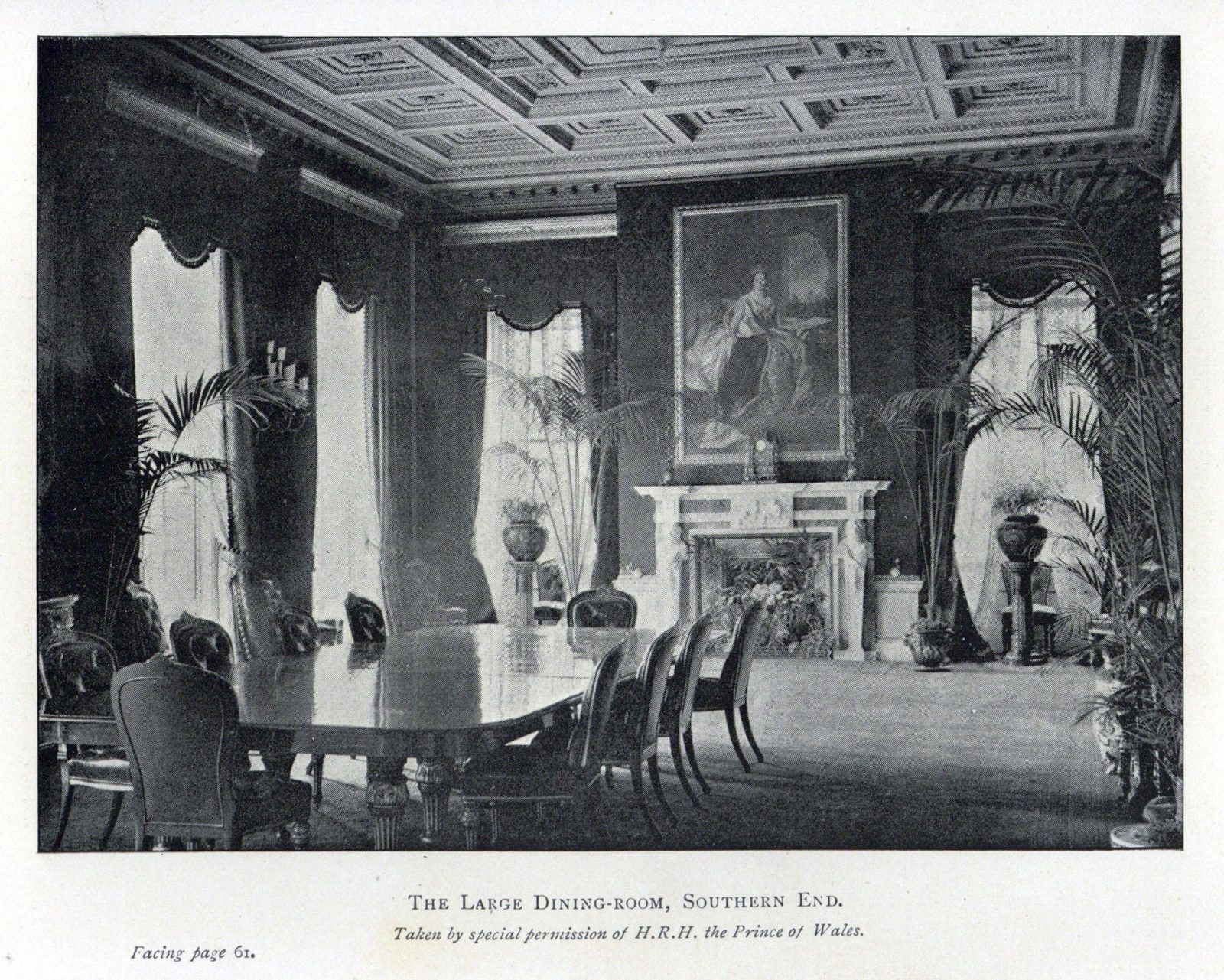 The Prince and Princess entertained lavishly at Marlborough House, and a highlight on their social calendar was their annual Derby Day Dinner, which Beavan describes in great detail, along with the sumptuous interiors of the dining-room. In regards to the present dining-table he writes, “In the state salle des festins at Marlborough House, the long table, with its covers laid for over fifty distinguished guests, is a fine sight”. (Beavan, op cit., pg. 61). The salle was adorned with Kentia palms, two ornate marble fireplaces, large portraits of several distinguished members of the Royal family, silk curtains from Dublin, all below a white painted coffered ceiling. The dining-table certainly was a focal point in the well-appointed room, and Beavan writes, “Not being over-crowded with furniture, the servants have plenty of room to move around the splendid table, which has on rare occasions been so arranged and enlarged as to accommodate seventy or eighty guests”. (Beavan, op cit. p. 62). The splendid gilded mahogany legs of the present dining-table blended well with the other furniture supplied by Holland and Sons for the room, including a “remarkable handsome sideboard by Holland and Sons “, which, “like the rest of the furniture,… is of mahogany and gold”. (Beavan, op cit., pg. 63).

Marlborough House, London was built by Sarah, Duchess of Marlborough between 1709-1711 under the direction of the esteemed English Baroque architect Christopher Wren. In the early 1770s William Chambers added a third story and put in the marble fireplaces. The house remained in the illustrious Marlborough family until 1817 when it reverted to the Crown and Prince Leopold of Saxe-Coburg-Saalfeld came to live here until he accepted his invitation to become the first King of Belgium in 1831. Later, it was home to the Dowager Queen Adelaide, from 1827-1849. In 1861 Sir John Pennethorpe removed Chamber’s attic story and carried out extensive renovations to prepare the house for its new occupant Edward, Prince of Wales, later Edward VII. A suite of fashionable new reception rooms were created, providing the setting for sumptuous entertainments attended by leading figures from British and foreign society. During Edward’s residence it was lavishly kept up by flamboyantly dressed maids and servants and was known as the ‘best house in London’ and the center of fashionable society. It remained a Royal residence until the death of Queen Mary in 1953. 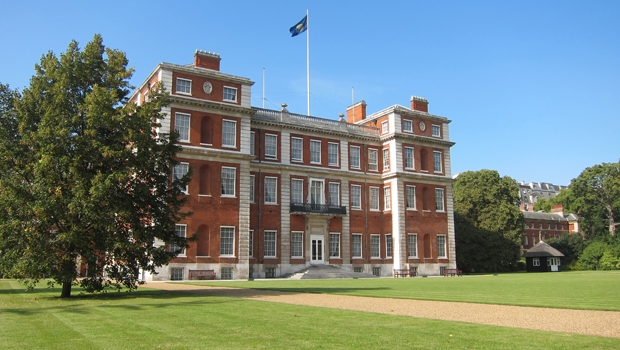 Holland and Sons were one of the most distinguished firms of English cabinet-makers during the latter half of the 19th century. They are first recorded in 1815 under the name of Tarpell and Holland at Great Pulteney Street, becoming Holland and Sons in 1843, and had several London addresses before moving to 23 Mount Street in 1852. Appointed Royal Cabinet Makers early in the reign of Queen Victoria, Holland and Sons established and maintained a fine reputation and an impressive roster of clients, including the Duke of Wellington, John Ruskin, Sir Robert Peel, Earl of Leicester and Anthony Rothschild. Their many prestigious commissions include furnishings for several West End London Clubs like the Athenaeum and United Service Club, and the contract for furnishings at the Queen’s new house Osborne, Isle of White, designed by Prince Albert (1850-51). In 1846, Holland Sons supplied a fine set of mahogany dining-tables, one-hundred and fifty feet long, to St. Georges Hall, Windsor Castle, for 378 GBP, now in the Waterloo Chamber. (Edward T. Joy, “Holland & Sons and the Furniture of Osborne House”, Antiques Magazine, April 1971, pg. 582). Holland and Sons was the quintessential Victorian cabinet-making firm; prolific and versatile, adept and proficient in interpreting a plethora of styles.